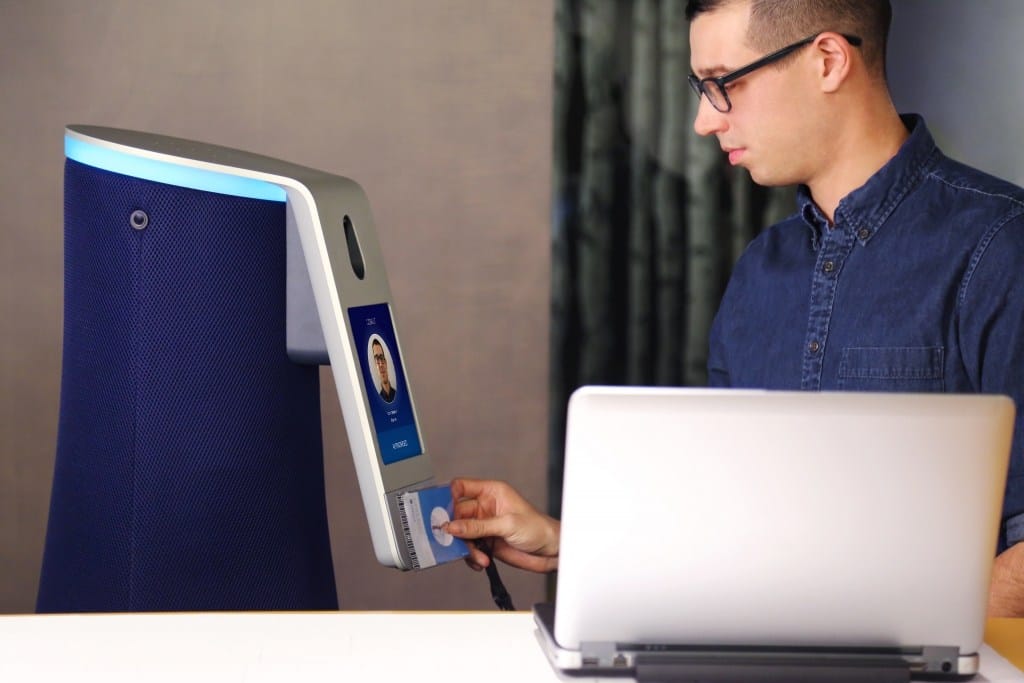 Combining advanced sensors, AI, and telepresence, this robot can be an effective security guard.

Finding a viable business case for a commercial mobile robot is very tricky. At this point, the most you can realistically expect from a reliable and affordable autonomous platform is the ability to navigate in a semistructured premapped environment, which Savioke (to take one example) has managed to do with its delivery robots for hotels. Despite the fact that robots can do work for businesses, it’s been difficult to identify use cases where they can be valuable enough that said businesses will pay money to use them.

Today, Cobalt Robotics (a startup based in Palo Alto, Calif.) is announcing an autonomous mobile robot designed for indoor security applications that can “work alongside human guards to provide better security than people can do alone.”

The key realization here is that security guards spend the vast majority of their time doing almost nothing, and even in a worst-case scenario (like someone trying to break in, or a fire or other serious problem), their primary responsibility is making the right phone call as quickly as possible as opposed to dealing with the situation directly. In general, a security guard needs to be able to walk around a building checking on things, occasionally interact with humans in a limited capacity, and (this is the most important thing) notice if anything unusual is going on and tell someone about it.

Cobalt’s robot is able to do all of these things. It can navigate around premapped areas in buildings, it can recognize people and read badges, and it has a pile of sensors (day-night cameras, lidar, microphone array, RFID and badge readers, and even smoke and CO2 detectors) that helps it to recognize potential security issues (unauthorized people, open doors and windows) and hazards (suspicious items, moved items, water leaks) and flag them for review. 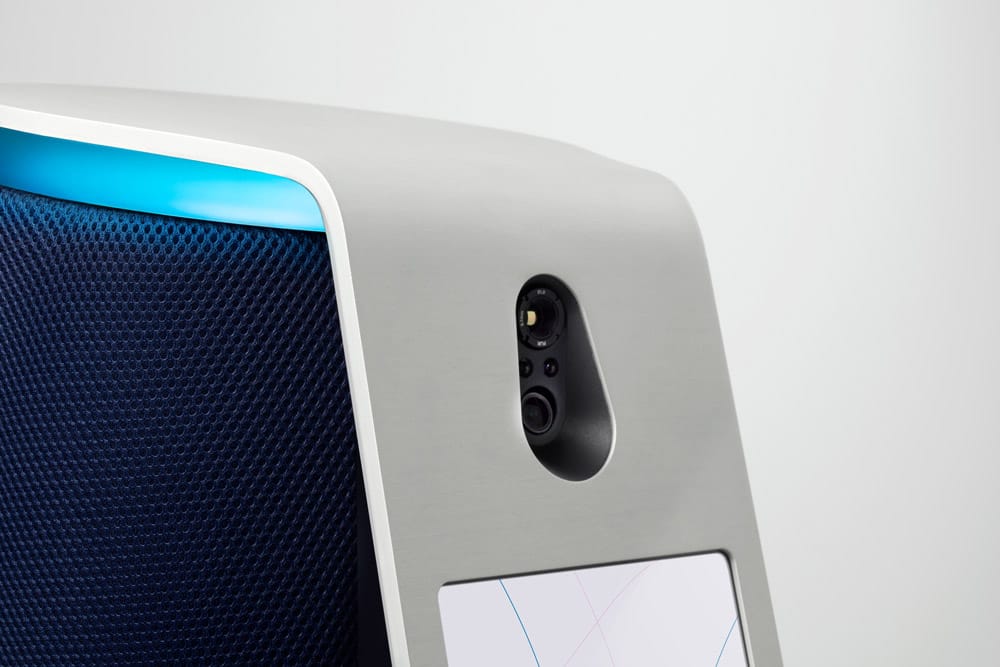 Cobalt was founded by Erik Schluntz, a former engineer at SpaceX, and Travis Deyle, who’s written for IEEE Spectrum in the past and comes from Georgia Tech’s Healthcare Robotics Lab by way (most recently) of Google X. The Cobalt team has enough background and experience with robots to know that while autonomy is important, having the option for a human in the loop can solve a lot of problems, so it’s easy for a remote operator to hop into the robot and control it via telepresence whenever necessary.

We should note that there are other robots in this space already—namely, Knightscope, which makes a very imposing security robot. Knightscope is taking a bit of a different approach, with a large and heavy platform that uses minimal HRI (human-robot interaction) elements and is—if that Velodyne on top is any indication—quite expensive. Knightscope can operate outside, which is certainly an advantage, and it seems more likely that it might scare away any baddies, but Cobalt isn’t really interested in the scare factor—for Cobalt, it’s more about detection and then making sure the right people know what’s going on in a timely manner, and having a robot that people will be comfortable working around.

Comfort is another key differentiator that Cobalt has been working on. The overall form and appearance of the robot come from Swiss designer Yves Béhar, who came up with something that (rather refreshingly) incorporates a lot of soft, tactile fabric rather than plastic and metal. “We decided that the robot should not adopt a humanoid personality,” Béhar said in a statement. “Instead, it should aesthetically align with the furniture and décor of the office environment.

As with any robot intended to do the same kind of job that a human can do, there’s a concern here that Cobalt’s platform will be taking jobs away from humans. And, well, yeah, if you just go and replace a security guard with a Cobalt robot, then that’s what happens, and it may make sense for some businesses to do this. However, there are a few other things to consider here. First, Cobalt may be an option for companies who want security but can’t afford a human guard, or can’t afford one for all hours. Second, Cobalt says that their robots can work sort of like force multipliers, working alongside existing guards to help them be more effective at their jobs. Cobalt will also be creating new jobs for robot monitors, who will be remotely managing multiple robots from a central location.

And lastly, we should keep in mind that security is one of those utterly dull jobs that does not take advantage of the talent or creativity that humans have to offer, and long term, finding jobs for people that are more interesting and engaging is probably better for everyone, if we can make it happen.

For more details on Cobalt, we asked Deyle, the company’s CEO, a few questions over email:

Why is indoor security an ideal application for a mobile robot?

One major, traditional function of indoor security is “observe and report”—looking for anomalies or intruders, and contacting the authorities if and when anything bad happens. Using extremely capable sensors (including night vision cameras, lidar, thermal) combined with recent advances in computer vision and deep learning, robots can provide superhuman capabilities and consistent operation around the clock without getting bored, sleepy, or losing focus. Our robot has eyes on the back of its head, can see in pitch black, and never needs to sleep. And when it finds something, it can “skype” in a highly trained pilot to make hard decisions, or talk to anyone in the space.

Mobility affords robots a number of unique benefits. First, robots can reposition themselves to get an infinite number of vantage points, including opportunistically relocating themselves to obtain additional information. This isn’t possible with stationary security cameras; to quote one of our customers, “No matter how perfect you think your security camera setup is, when something happens you always wish you had a different view or angle.” Second, many security policies do not allow guards to put themselves in harm’s way to confront would-be intruders; mobility allows the robot to respond immediately to a would-be intruder and reduce intruder time-on-premises. A third thing is that a mobile robot roaming the premises serves as an active deterrent to undesired behavior.

Why haven’t mobile robots been used in indoor security in the past? Or, what’s special about Cobalt that you’re able to deploy robots in these semistructured environments?

It’s partially about timing. Many of the component technologies (AI, machine learning, sensing, computation, communications, etc.) are now sufficiently mature to make this product feasible. Those components continue to make big gains due to investment in other areas of robotics and AI.

It’s also partially about fortuitous encounters between experts in otherwise-disparate fields (robotics and physical security). There’s a famous quote from world-renowned computer scientist Alan Kay that says, “A change in perspective is worth 80 IQ points.” Cobalt was founded by technologists and roboticists with many years of experience working with indoor robots. We spent a substantial amount of time speaking with forward-looking visionaries in the physical security industry who became our close advisors, initial customers, and biggest champions. While other people may have looked at robot security, we happened to look at it from the “right” perspective: our customers’ perspective.

What are some unique challenges that your robots will have to deal with, and how are you handling them?

Indoor security is about more than deterring and detecting intruders—it’s also about making employees feel safe and comfortable. We focused heavily on industrial design and human-robot interaction to make our robot as easy to interact with and as pleasant to be around as possible. We use warm materials like fabric and anodized aluminum that would normally be seen in a high-end office, rather than the plastic and steel of an industrial robot. The centerpiece of our robot is a touch screen to let people interact with the robot and video chat with our pilots.

Another challenge was providing consistent security coverage for an entire night shift, or even an entire 48-hour weekend shift. We realized that the robot should never turn off while it’s recharging—it’s always on, looking for unusual activity and ready to respond. It’s just like a guard standing watch at the front desk between patrols.

Can you describe how Cobalt is mixing autonomy and telepresence by having the option for a human in the loop?

We fundamentally believe that robots should interact with and around people. Cobalt provides a solution that dovetails advanced autonomous functionality with human telepresence capability. So sometimes the robot will autonomously respond—for example, navigating up to a person and requesting badge credentials. In other situations, the robot will video call with a pilot for human-level cognition and response.

Is the security solution that Cobalt is offering both reliable and cost-effective relative to a human? How expensive are the robots, and how much money would a company be saving over employing humans?

Security is necessary, but it’s often cost prohibitive for companies to provide 24-hour security presence. This is a real problem with real needs and real budgets. Cobalt can provide security coverage where there are currently major gaps at one-fifth to one-third the cost of a traditional solution.

Security personnel work with a fleet of robots to provide a more reliable and more cost-effective service. Robots help with the dullest, hardest parts of security (like night-shift patrols) without falling asleep, and they will alert the rest of your security staff only if there’s something worthy of note. Each robot pilot can oversee tens of robots, which allows guards to cover more ground and have visibility exactly when and where they need it. Plus, all of the sensors and components of the robot are becoming remarkably cheaper thanks to other industries, such as self-driving cars!